Asilomar #1: What Do We Do With Algebra II 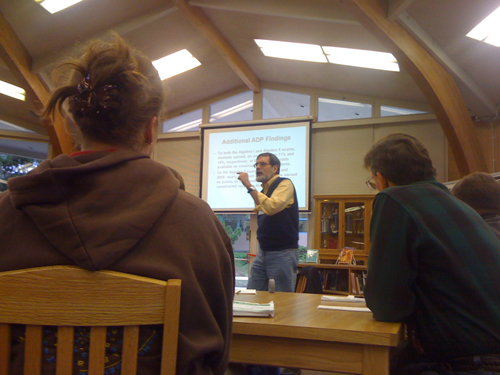 Thoughts On Rationalizing Algebra In Ways That Serve Kids, Not Universities

The day before CMC-North I was trading notes with our lead counselor, just swapping stories about kids, when she mentioned a student who was at the end of her turn at the local community college. She’d be transferring to a state college to complete a liberal arts degree if it weren’t for a failing grade in Algebra II. Because she can’t yet perform long division on polynomials, she’ll have to postpone her degree in (just guessing here) linguistics a full year.

Leinwand opened his talk: “The great divider of our time is the Algebra II final exam. Algebra II squeezes off options for so many kids. Algebra II is anathema to all but the top 20% of the population. My premise: as currently implemented, high school algebra I and II are not working and not meeting either societal or student needs.”

He described the courses as “focused on increasingly obsolete and useless symbol manipulation at the expense of functions, models, applications, big ideas and statistics.”

He works with schools across North America and when he’s trying to get a feel for the tenor and rigor of their math programs, he asks for:

He said they give him unrestricted access to the first four but balk at the fifth. He said, “if you want to engage people in discussion, go and get those finals.”

Leinwand asked, why are most Algebra II final exams balanced towards the verbs:

… when math is ever so much more about being able to:

Leinwand: “No one is saying throw out the old dialect, but what about the new dialect.”

This all came across depressingly but he ended on a hopeful note, citing several promising projects. Among them, The Opportunity Equation, which aims to:

… explore the feasibility of offering a mathematics pathway to college for secondary students that is equally rigorous to the calculus pathway and that features deeper study of statistics, data analysis, and related discrete mathematics applications, beginning with a redesigned Algebra II course.

He called the forthcoming Common Core math standards “the last, best hope” for meaningful math reform. He ended with a proposal for Algebra I and Algebra II curricula, paced at one chapter per month.

PowerPoint. Black text on a white field. He introduced his slides with this, “These are terrible slides coming up. You want to read PowerPoint slides that break every rule of PowerPoint these are them.”

I felt sick. Leinwand had attended my PowerPoint: Do No Harm talk last year and I could only hope he hadn’t added that disclaimer on my account. He was wrong anyway. He used his slides as conversation pieces. Doesn’t matter to me that they were monochrome.

All of this just highlights the real problem: universities and colleges want a gatekeeper. They want that extra way to filter admissions, because they have to do it somehow. Worse, they don’t want to be seen as the “easy” school to get into, because this lowers their respectability. (This also drives me crazy.) So they demand gatekeepers, whether or not those gateways are actually a more useful math education for their students.

Asilomar #2: What Do We Do With The Seniors?   Edublog 2009 Nominations
Unless otherwise noted, everything you and I post here is licensed
for reuse under Creative Commons Attribution 4.0 International.