This is my third year blogging about teaching. A profoundly cool byproduct of edublogging is that on occasion you get to be the dealer who hooks someone up with her first hit of online expression. Someone reads something you wrote and her response is visceral enough to overcome her online inhibition and comment. And she lives for awhile in various comment boxes around the blogosphere until those confines cramp her too much and she gets a Blogger or WordPress blog of her own.

I haven’t given enough thought to this but, among the blogs I read and wander past, there seems to be a generational effect at work and it freaks me out. I’m not presuming an exact genetic link, where I gave “birth” to blogs that came after mine. I’m referring to timing.

Chris Lehmann’s Practical Theory, for instance, was the first edublog I read. His blog motivated me to turn a private blog public. Jackie Ballarini was one of my earliest commenters who eventually set out to do her own thing. A year after Jackie Ballarini you had Kate Nowak, one of Jackie’s readers, now submitting fine work at f(t). A year after Kate Nowak you have Elissa Miller writing up the new teacher experience at Miss Calculate.

No doubt, all of our decisions to hang out our own shingles were motivated by more than just one graybeard blogger. I have no idea, for instance, where Ian Garrovillas, Sam Shah, and Sean Sweeney fit into in this timeline nor do I have any idea if Twitter accelerates or decelerates this process. But the general effect is clear: people take their education into their own hands which provokes other people later on to do the same thing.

What Can You Do With This: Dan & Chris

The last few weeks have been pretty profoundly discouraging on all three of my professional fronts. I’m sure it’s just the ebb tide of education but it’s worth mentioning that I’m specifically losing my mind over this WCYDWT thing, which is just a thing and may be much less than that, some form of digital wankery, I don’t know.

It’s like when you were a kid and you whispered the word “football” over and over again until the compound word separated and both parts seemed weird and meaningless all at once, that’s something like giving three conference sessions on the same process of curriculum design in four months. I can’t convince my fellow curriculum specialists at Google nor the teaching cohort I mentor online nor my high school colleagues of its value, which makes convincing myself of its value suddenly a real trick.

I’ll say this much for certain: if there’s value here it isn’t in the comment, “Rates! We could talk about rates!” The response to these media too often breaks down into a checklist of mathematical conversation starters and if you’re going to offer them any more than two minutes of class time then they absolutely have to be more than that. They have to earn their keep.

What do the students do with the photo? What questions will they ask? What measurements will they need? Once they’ve resolved the first question and feel like they have a stronger grip on the concept than they really do, how will you twist the scenario around to challenge them? How will you create that crisis?

Maybe it’d be better if I showed all of my cards up front, rather than this coy unveiling process which seems like a non-starter. If the exercise interests you, help me construct a narrative, an activity around these photos. Extra credit if you feel like contrasting it against Sean Sweeney’s pass at the same material some months ago.

I only know I shot this because I felt like I needed it, because the alternative is a problem involving savings accounts with different principals and different monthly deposits and none of my kids have savings accounts.

… what happens is that when kids reach a point in their mathematical education where they are asked to prove things, they find

The way out of this is to give them a crisis. We need to give them problems where the obvious pattern is not the real pattern. What you see is not the whole story! Then, there is a reason to prove something.

I have become convinced, overwhelmingly, that my value to my students as an educator is bound up less in what I know (though knowing things doesn’t hurt) than in my ability to engineer a safe, controlled crisis in their learning process (which, I think, requires knowing a whole lot about something very little).

Blum-Smith’s post connects a lot of my recent disconnected writing – in particular, my intention to be less helpful and my interest in a learning process that positions new knowledge as the solution to the limitations of old knowledge. As far as teacher mug slogans go, “create crisis” should start some good conversation in the faculty lounge. 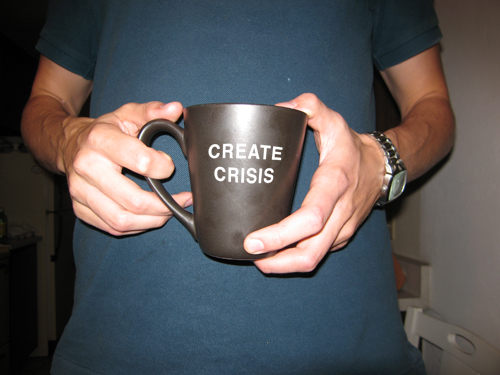 Aside: I’m reviewing some of O’Reilly’s Head First material (for some small profit, in full disclosure) and their authors do a fantastic job creating crises. There are two chapters in the Head First Programming, in which the reader learns searching, strings, and branching. Watch how they do this:

And so on. It’s extremely satisfying.

Nina Simon, a Santa Cruz neighbor, designs participatory museum experiences which she has dubbed “Museum 2.0.” She compiled an excellent list of questions that support and suppress participation:

Here are some of the wrong questions:

Let’s set aside the fact that she uses “teacherly” as a pejorative. The applicability of this post to anyone who spends the majority of her work day asking students questions should be obvious.

Furthermore, I haven’t set aside the puzzle I posted in You Have No Life. I’m ripping pages out of the playbooks of people who spend their working lives “engaging the imagination so that people don’t feel threatened by it”: Nina Simon (museums), Jane McGonigal (games), and David Milch (television, quoted). The projects highlighted at the Kickstarter blog (miscellaneous) are essential reading also.

Robert Cringely hops on the higher-education-is-screwed meme in Burn Baby Burn [via]:

Education, which – along with health care – seems to exist in an alternate economic universe, ought to be subject to the same economic realities as anything else. We should have a marketplace for insight. Take a variety of experts (both professors and lay specialists) and make them available over the Internet by video conference. Each expert charges by the minute with those charges adjusting over time until a real market value is reached. The whole setup would run like iTunes and sessions would be recorded for later review.

I’m not in the prognostication business. I draft off more serious thinkers on the open question of the effect of the Internet on higher education. I don’t know if I’ve missed a dumptruck-sized hole in Cringely’s reasoning but I found the piece extremely provocative and I’ll be revisiting it later in this space.

I want to buy a coffee table book packed with anecdotes just like this one from Ian Garrovillas, illustrating the healthy, cool interaction between a student and teacher.

These are my people, my students this year. They’re averaging just a bit above a 1.5 GPA.

I tried to graft a structure onto this post but nothing stuck. Topical bullet points from the failed drafts:

The only draft that mattered was this:

The blue students indulge none of my laziness. They tolerate none of my bad habits. There are all kinds of students at this school – gray students, we’ll call them – who will let me slide on all kinds of carelessness so long as I keep them moving toward graduation, college, and career.

But graduation, college, and career are all abstractions wrapped in scare quotes to my blue students. So they pummel my flabby pedagogy daily to the point that I’m burger. Lean burger. You can’t believe the gratitude I have for such a challenging year.

I was on Good Morning America yesterday, one third of a segment called “The Art of Beating Long Lines.”