The only part of Arthus v. Old People that didn’t bore me was this comment from Doug Belshaw, where Doug a) dropped video commentary, b) summarized the video commentary in text, and c) inadvertently made the case I tried to make in my first vodcast, that video is sometimes – more often than not, really – used inappropriately. 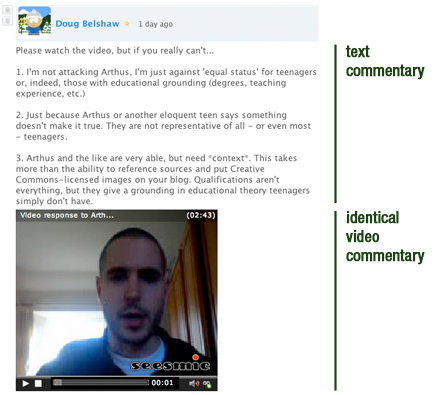 Video through Seesmic is uneditable and unindexable. You can’t search it and, while your mileage will vary with your reading speed, I made my way through Doug’s three text points in one-fifth the video’s time, due in large part to conversational tics which are simple to elide in text but impossible to compress with Seesmic.

Doug says this adds personality and I can’t bring myself to disagree completely. In an e-mail exchange (posted with permission) he expanded:

It’s that personable element. We’re people, not robots at the end of
the day, and it’s nice to inject some human qualities into a
discussion.

I don’t think the well-written word is necessarily less human than video, but Doug’s point is taken. The question is then: is personable video worth the cost.

in the time it takes to speak one sentence, i can read about 4 or 5. the data throughput for text is much higher than for voice.

i can also tune my comprehension level while i’m reading – if it’s of moderate interest, i skim quickly. if it’s thick and intellectual, i slow down and ruminate on it.

not only is reading higher bandwidth, it’s adaptive.

you can’t do that in video.

My summer of video (seven of ten episodes completed so far) has left me a lot to push around in my head. I’m filtering the VidSnacks tagline (“Video is the language of the 21st century.”) through the fact that an average dy/av installment catches a third the eyeballs of an average dy/dan post, and the whole thing seems more naïve than it did the last time.

Video is a language which few people communicate well and even fewer care to hear.

dy/av : 005 : preview   I Stand Corrected On That Whole Wordle Thing
Unless otherwise noted, everything you and I post here is licensed
for reuse under Creative Commons Attribution 4.0 International.