I can’t tell you what an exhilarating experience this has been – writing, shooting, and editing this slate of ten vodcasts. It’s like turning over a rock and finding a new language, one which gives voice to a lot of thoughts you’ve had banging around in your head, thoughts that have been looking for an exit for a long time.

I’m still trying to navigate this new grammar, trying to avoid the film equivalent of run-on, illiterate sentences. I’m finding the equivalence between shots & edits and sentences & punctuation, finding inspiration in Hillman Curtis, who is the most literate voice in online film today, particularly if we control the selection for a certain DIY ethos. Please watch the first half, if not the whole, of his portrait of artist Lawrence Weiner. 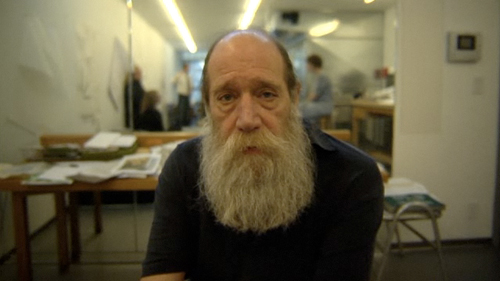 Vodcasters like Ze Frank understand that good video is largely about compression, about sharp edits compressing the time between thoughts, events, and locations. (ie. here you’re in Belize, now you’re in Chattanooga) Hillman Curtis gets that great video – like great writing – moves to a rhythm, one which must speed and slow.

Curtis understands that, in film, as in writing, you can force the reader to slow.

By breaking up the text.

Or, in video, by lengthening the shots.

A third of the way through the Lawrence Weiner portrait, Hillman Curtis does just that with a long, slow tracking shot, the rails obvious beneath the camera, laying bare the mechanics of film.

The odds are 5:2 at best but I may score a video production class this upcoming school year in addition to my usual slate of Algebra, Algebra, Algebra. I couldn’t be more excited.

Feltron Post-Mortem   dy/av : 010 : the season finale
Unless otherwise noted, everything you and I post here is licensed
for reuse under Creative Commons Attribution 4.0 International.