Occasionally I need to reassert myself as a math teacher, on this particular day because I realized Math Bloggers doesn’t include me in their tracker. Look! I am so a math blogger. So here’s what’s good lately: 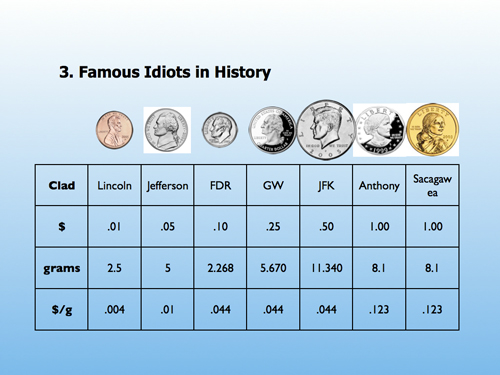 I run this interlude in every age group. Awhile back some thieves got busted with a lot of nickels. The conversation on this one can’t be beat and eventually wraps itself around the idea that high cash value is great but has to balanced against the weight of a coin.

So you head over to Wikipedia and pick up coin images, then over to the treasury page detailing coin weights and you’re asking questions and taking bets constantly:

Then you have them calculate the ratios and you notice that one fantastic thing about the dime, quarter, and half dollar (consulting Slate if you’ve gotta) and you preface the whole thing with, “Let’s become smarter thieves.” Riveting. 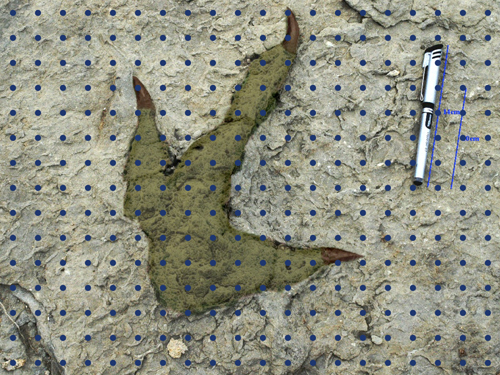 Pick’s Theorem calculates the area of irregular, weird shapes using a grid for reference. I realized as the class bell rang I was only using boring irregular shapes (quadrilaterals that didn’t shake down into the usual categories) so I ran online, searched up Google Images for a fossilized footprint, put one dot down, and then copied-and-pasted-and-distributed-space-evenly the hell out of it until I had the picture above. All in a coupla minutes.

No image credit. I suck at that. 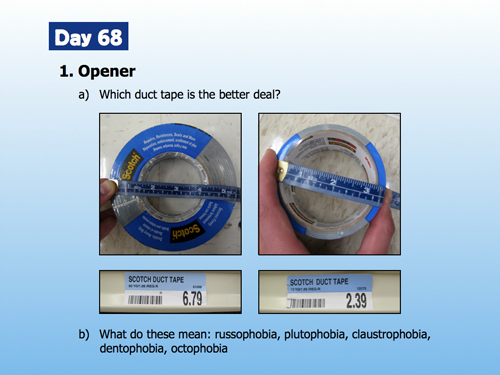 Cherish the openers which a) span but one question, b) inspire fifteen minutes of sturdy work & discussion, c) incorporate real-world visuals, and e) play off their self-regard as savvy consumers. 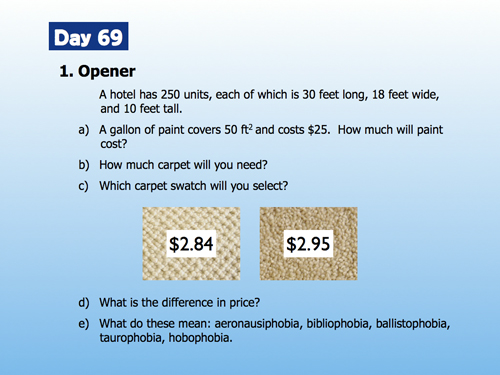 Those scamps took this one farther than even I wanted to, talking about subtracting the door’s and the window’s area from the surface area of each room, etc., etc.

Also, the third question didn’t show prices until I advanced the slide, so for a few seconds, we all argued violently over nothing more than carpet swatches, namecalling over color and texture.

Well hopefully that settles that. I’ll see you all in a year or so.

Six Seconds   How Teaching Movies Fail Me
Unless otherwise noted, everything you and I post here is licensed
for reuse under Creative Commons Attribution 4.0 International.