PowerPoint: Do No Harm [Behind The Scenes]

Off my last OTF experience I brought 40 handouts with me. 37 came home.

When three people show up for the presentation to which you drove three hours and for which you spent 12 hours structuring content, creating slides, and designing handouts, it’s impossible not to run the numbers – that’s five hours investment into Austin, Dale, and Niko each.

I admit I’m most comfortable addressing large crowds (by which I mean, larger than three) and structuring interaction between the members. Obviously that wasn’t going to play with three people so I tossed myself out of the 747 and hoped the parachute would deploy.

I didn’t stand in front of them. I sat with them and we talked. I kept a loose grip on my wireless remote. I asked for their frustrations with PowerPoint, for their solutions. I issued challenges. I asked whether a slide would work well for kids and, if not, how it should be improved. As conversation lagged, I advanced slides and put up different visuals. The prompts and discussion began anew.

Feedback On My Improvised Constructivism

100% positive exit slips. ONE HUNDRED!!!! That’s a lot of percent right there.

My handout design followed the steps outlined here. To recap, if you’re simply selecting “Print” from PowerPoint’s “File” menu, you’ll find your handouts lining the recycling bin outside the venue. 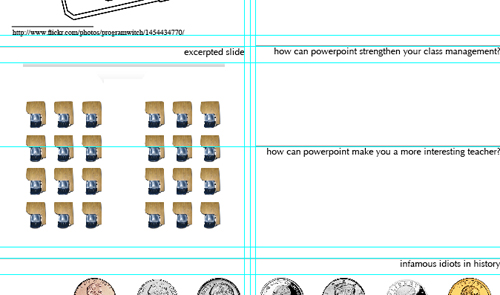 I used InDesign and invested heavily in grids. The finished product met my expectations.

No observations I haven’t already whomped on the head a few dozen times already. Just that a) you’d better be able to bounce a quarter off any PowerPoint presentation which takes aim at best PowerPoint practices and b) on successive edits I consistently deleted slides. Whatever that means.

After we finished the third in a set of math-rich images I found online, Dale asked, “Where do you find this stuff?” a question which I managed to miss pretty spectacularly.

“You see, um, I check a couple hundred websites each day but, see, it only takes like forty-five minutes because of this thing called, um, RSS, and you can get a reader from, for example, Google, and it’s totally free and … and –”

– and essentially I’m really unhappy with you guys for not prepping me for this one. If my personal learning internets hadn’t fumbled the ball here I might’ve had Common Craft’s explanation all queued up. Next time I’ll be ready.

Is The Superiority Here Obvious To Anyone Else?   The Two Best Articles On The Achievement Gap You’ll Read This Weekend. And The Worst.
Unless otherwise noted, everything you and I post here is licensed
for reuse under Creative Commons Attribution 4.0 International.