Evolution Of A Math Educator

At first, your students don’t know anything because you teach poorly, and you know this. Then, you become happily aware that some students are learning. You know that other students still aren’t, but you are pedagogically nearsighted and can make only blurry distinctions between the two camps. Your teaching improves and the ranks of the Is Learning camp swells and you know the members of the Isn’t Learning camp by name. You develop better methods of tracking achievement and you know exactly what the students who aren’t learning haven’t learned. Moreover, as you teach, you begin to anticipate the material that will confuse these students. You realize that your intervention can effectively transfer a student from one camp to the other. At a certain point, the technical challenges to increasing student achievement disappear, but the moral challenge remains. Will you do it? Every day, every hour, every student for 180 days, will you do it?

When It Rains It Pours

Man, this economy keeps getting worse. Now I have to rewrite last year’s warm-up questions:

Most Santa Cruz houses are more expensive now than they were a decade ago. A $450,000 house with three bedrooms, a pool, and a monkey butler, increased to $1,000,000. What was its percent increase?

This one is actually pretty easy to adjust.

I’m having a difficult time determining why I walked away from three days at ILC so deflated while three days at CMC-North has me bouncing off walls.

There is a lack of substantive criticism in the edtechno-blogosphere, I think, which is mirrored in these presentations, where people hop up to the front of the class for an unfocused, but definitely emotional, show-and-tell, and few people either care enough or have enough temerity to suggest that higher standards should apply. The feedback mechanism is, by and large, overly polluted by emotion.

By contrast, the crowds at CMC-North are vicious, though constructively so. I appreciate this and I know that overall session quality has risen to the occasion. As educators, the stakes are too high and the time constraints too stringent to settle for anything less than our best efforts, even if hearing that we shouldn’t lecture from bulleted slides for an hour is painful.

Jon’s response is entirely on point and he invokes my new favorite word, which I am trying to wedge as much as possible into my daily correspondence. 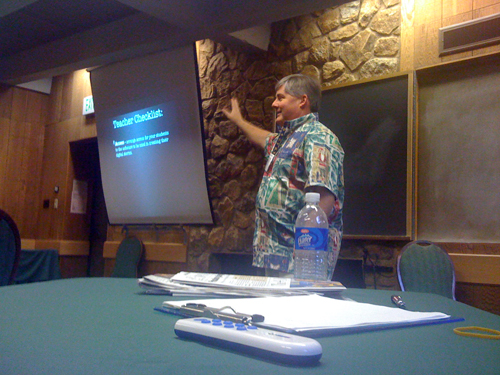 I Just Came From The CUE Conference And It Was AWESOME

His thesis went: kids spend a million hours per day gaming, texting, blogging, e-mailing, chatting, so you should give them the opportunity to express themselves digitally in your math classes. Brian demonstrated equipment and software and played examples and gave a lot of respect to typical concerns of access (many of the utilities are free as in beer) and time (assign the projects after class for extra credit), which was all good.

How do we assess this stuff? If we believe that a video explanation of fractions is sufficient demonstration of fraction mastery, then that needs a more meaningful place in our grading schema than “token extra credit.” This is easy if you break your grades out by standard. Otherwise, how?

Put another way: If you’re going to accept all manner of digital expression in your classroom, what is your obligation to know good expression from bad expression? I mean, I dunno, do you subscribe to any design feeds? Have you taken a class on photography? Do you know what separates good videography from lousy videography? How much should you care about issues of quality? Does your emphasis on multiple disciplines demand multidisciplinary expertise?

Eventually we need to stop framing this as a technical challenge. The challenge is creative.

The only person, to my eyes, who used Keynote. Plus QuickTime movies and a lot of screenshots. Student response systems for surveys. 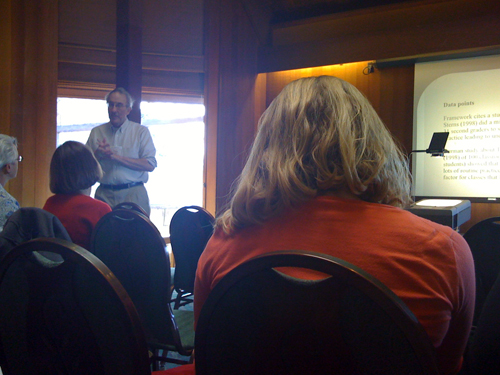 What Does A Complete, Balanced Curriculum Really Mean?

Declaring The Math Wars A Draw

I have to admit right away to a total blind spot for this guy. Tom Sallee could read passages from a microwave repair manual and I’d enthuse wildly. He’s dry, sarcastic, though self-effacingly so, and extremely personable, interested in every mundane detail of your life. If I manage to shed some of my more ornery twitches, I imagine I’ll arrive somewhere near his personality. This matters only to me.

“This is a truly gorgeous day,” he said, and gave us all explicit permission to leave if the talk began to not meet our expectations. “If it were blowing a gale out there I might be hurt, but not on a day like today.” I have to believe this kind of confidence is essential to certain really great teachers. He knew no one was leaving.

He discussed California’s math framework for students and teachers. He noted the semantic significance of the teacher goals appearing above the student goals, and along similar lines, he said he thought California prioritized them inadequately.

He thought logical thinking was seeded at least one ranking too low.

He defined the warring math factions as a) those who believe math is about knowing a set of principles from which you should be able to solve something new, and b) those who believe math is about knowing what you have been taught. He said they represent fundamentally opposing world views. At one point he believed that with enough research and enough dialogue those factions would dissolve but “I have given up on that,” he said.

He put these up:

And asked, how do we test each of these? which of these are cheap and easy to test? which are expensive and hard? which will be tested?

“Let me tell you my answers:”

“Algebra is about four or five concepts. However, if you separate coin, rate, and mixture problems, then there is a lot more there.”

Someone from the crowd asked him to define them.

“You need to understand what a variable is and how you can use it to represent a situation. You need to have a general strategy for solving a series of equations when you have several variables. There is a relationship between equations and graphs. Proportional reasoning. Multiple representations.”

That fifth one was difficult for him.

H!, who is half as tall and twice as Norwegian in person.