Students will learn to take the data barrage and test it against the visual canon – graphs, bars, pies, stacks, and lines. They’ll invent their own visuals, improvising on the classics to deliver information and self-expression in the same package. They’ll visualize data so well and so often that by the end of the course they’ll wear glasses they can’t feel and which others can’t see, glasses of the strongest possible prescription, ones which make truth and untruth so obvious they’ll have to share it.

Imagine an unparsed spreadsheet of effectively infinite length. One million monkeys with one million typewriters drinking one million triple-shot lattes couldn’t make this happen in their lifetimes. It’s the FAA’s tracking data on every flight arriving in and departing from the U.S.

Yet force it through just the right visual sieve and patterns emerge. Within the patterns, something true. 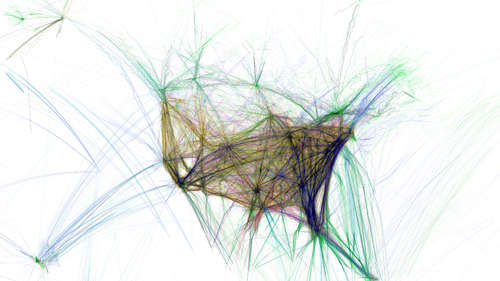 Levy and Murnane’s The New Division of Labor.

It’s something new everyday. Some of these have made already the rounds:

But there’s only one model for where we’re going, only one info designer who communicates and quantifies his personal obsessions through clear, unique design. It ain’t Tufte with his Sparklines. It ain’t Sagmeister neither.

Who Is Andrew Kuo?

I can’t imagine how many wrong turns it’d take for someone from the edubloc to find herself in Andrew Kuo’s neighborhood. He’s a degenerate, a gentleman, a music critic, and a design savant who casts off some of the ‘net’s freshest design work on his generic-themed Blogger blog (ranked somewhere in the 100,000 range) like it’s nothing big.

Or consider his character mapping of R. Kelly’s Trapped in the Closet opus, which lives outside the realm of recognizable infographics, but which imposes a preposterous sum of information onto a two-dimensional JPEG:

My students and I will pack lanterns and dried food for a week and go on a spelunking field trip inside his head, seeking out the source of the funniest and most functional infographics the 21st century has seen to date.

Andrew Kuo is the final exam: take your deeply personal preferences and make them deeply accessible to anyone.

Andrew Kuo is why students will love this course: Information Design is nothing apart from their passions, likes, and dislikes.

Which math class on your master schedule can claim that?

Who Is Nicholas Felton?   So Hold Onto Something
Unless otherwise noted, everything you and I post here is licensed
for reuse under Creative Commons Attribution 4.0 International.