We started with four variables (text messages, beers per day, etc.) which we tracked for 2.5 months in quad-ruled notebooks attempting to transform the quotidian details of our lives into extraordinary infodesigns a lá Nicholas Felton.

This was a departure for me. A tech-driven, student-led, design-infused mathematical project. Things went wrong.

This is a comprehensive autopsy of our Feltron Project. I post it here, in its entirety, a) for my own review next year, b) for your criticism. If you aren’t in the mood for the full, bone-by-bone dissection, please scan down to the section headed What Really Happened. These are problems I don’t know how to solve.

a/k/a What Was Supposed To Happen

Students ranked themselves on a ten-point scale across each index. Given how deeply we had immersed ourselves in exemplary work over two-and-a-half months, with only a few exceptions, I gave them exactly the grades they felt they deserved.

What I’ll Do Next Time

a/k/a If There Is A Next Time, Obviously

Just do a month.

–JG, smart; we’ll multiply a month by 12 to extrapolate for a year.

Everyone should track the same thing because it’d be really cool to see which people are like you.

–BP, also smart; resolved, then, that we’ll select three variables independently of the class and then select a common classroom variable for the fourth.

I like the chalang. It feels like I acopolished something hard and it made me feel good.

–BS, sic sic sic; whose mother, in an IEP meeting, said of his Feltron notebook, “He carries it everywhere.”

Nicholas Felton consented to an e-mail interview on his process which will appear in this space tomorrow. 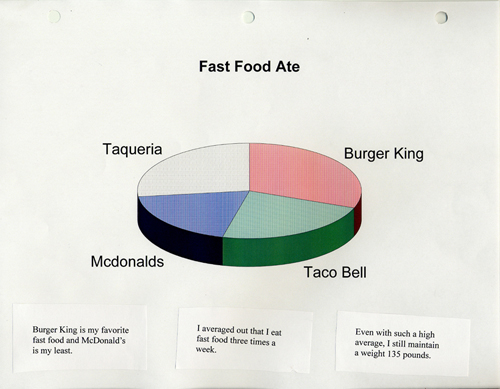 I have installed student work – everything from awful to exemplary, but mostly exemplary – into a Flickr set.

This was a different, necessary kind of insanity for me to finish my fourth year teaching even a little eager for a fifth. The price tag was steep. To accommodate this time-sucking project-based learning, we skipped a third of our logic unit in Geometry and fully jettisoned last year’s Platonic Solids project.

If I weren’t already guzzling away at this barrel of standards-based Kool-Aid, I’d write something agitated and truly inexcusable here about curriculum narrowing or the time cost of NCLB, but I remain convinced we need to settle on a list of necessary skills and then decide horse-in-front-of-cart-style on the best tools and projects to teach them. I do not know if this was that.

There are twenty-four hours. No exceptions. I’m uncertain Feltron was the best use of our time.

I put Feltron to rest now, surely the weirdest assignment I’ve concocted in a four-year career. I post this here to solicit the usual gallery of critique and construction but also because, at some point in this whole blogging thing, I forgot how else to end a project if not with rigorous and public self-critique.

Interview: Nicholas Felton   The Best Vodcaster Alive
Unless otherwise noted, everything you and I post here is licensed
for reuse under Creative Commons Attribution 4.0 International.