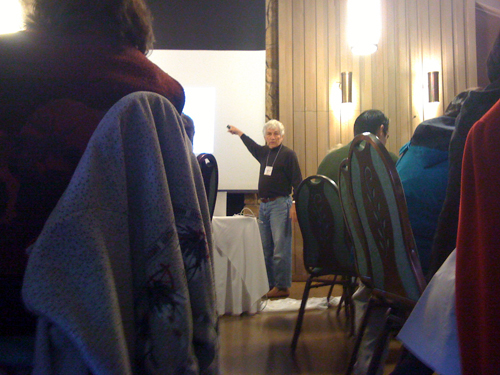 A structure not dissimilar to Megan Taylor’s yesterday, where Serra debuted games and puzzles and gave us time to tease them out.

I sat with two former colleagues in the back – all of us now at different schools. One teacher enthused over Sudoku puzzles. They challenge kids. Kids like them. It gets them comfortable with numbers. The other enjoys Serra’s games and puzzles, like Lunar Lockout. Both cite improved student disposition toward math and improved deductive reasoning.

I disagreed with them. In general, I find it dangerous to put too much distance between “fun time” and “math time” preferring, instead, to have that cake and eat it too, creating as many challenges as I can that are both fun and mathematically rigorous. (Which Sudoko, to put it plainly, isn’t.) My task is harder, I think, and I know I fail at it more, but I’m more satisfied on balance.

It was a good conversation. Feel free to interrupt us.

Serra’s best offering for my money was Racetrack Math: 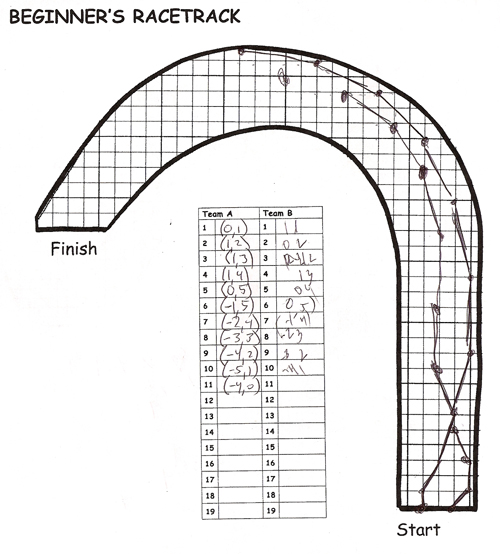 This gets very interesting very quickly. You start out with tiny vectors which lengthen by one unit every turn. If you fail to notice the side of the track off in the distance, though, and fail to slow down in time, you crash. (Which I did in the example above.)

I hereby toss all of my battleship exercises in the recycling bin. This is a much more straightforward introduction to positive/negative coordinates since each new turn is relative to the last turn rather than relative to this strange coordinate axis thing.

Plus, your students can create racetracks of their own, of infinite complexity, within seconds. Serra cited some kids who created a pit lane, which you had to enter on your second lap, and oil slicks, on which you could not adjust your vector at all. I’m impressed.

PowerPoint. Which is tough when you’re asking people to solve a puzzle. If someone suggests an alternative route to the one you have programmed into your slide, you have to dodge their answer a bit.

Blank puzzles and games to draw on. Again, paper is not dead. How do you do this digitally? Load each picture one at a time into Skitch and pass a stylus back and forth? Moderation, please.

Asilomar #6: Infrastructure Investments   Asilomar #4: PowerPoint â€” Do No Harm
Unless otherwise noted, everything you and I post here is licensed
for reuse under Creative Commons Attribution 4.0 International.