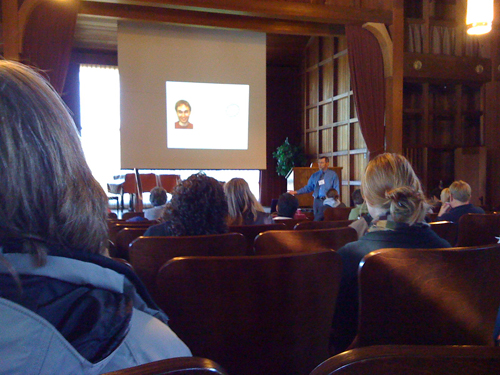 Visualize Algebra & Geometry Concepts With The Greatest Of Ease

I downloaded Geogebra a million years ago and recognized immediately its value as a free alternative to Geometer’s Sketchpad but I shelved it in my Applications folder and didn’t touch it after that. Like I tweeted during the session, I’m probably the last person in the fifty states to get with this killer program, which lets you create geometric figures, intersect them, drag them, and watch the system change on the fly. This session served one invaluable purpose:

Bill Lombard sat me down for 90 minutes and forced me to play. He demoed the program and I just followed along.

This was a presentation, not a workshop, though, which put Bill Lombard in a difficult position. How do you convey the power of dynamic software when you’re just one guy using it at the front of the Asilomar chapel.

His solution was to ask for audience input and query at every turn.

“What color do you want this line?”

“What shape should we draw next?”

“What would be a good variable for this slope slider?”

It was great. People gasped at various intervals, and I’m 99% sure I heard someone muffle a sob somewhere behind me, the software is just that beautiful.

A tri-fold paper (not the only time I saw this format) useful mostly as a link to his personal site.