My Students Have My Mobile Number

Per the demands of an outdoorsy, running around-type review exercise, I gave my students my cell number two months back. Since then, I have received 23 unsolicited text messages. The first three were overly familiar, the sort you might call pranks, one of which read:

we’re your favorite students right. this is [name redacted].

These are the sort you just ignore. Accordingly, the next one read:

The following twenty have each been scholarly, appropriately curious, and sent between a high school math teacher’s typical waking hours. They receive immediate response. A recent sample:

Whats the code for the Feltron project on excel, sum… Plus something?

Perhaps I dodged a bullet here. I’m pretty sure, though, that a lot of this was bound up in how I presented it: as an adult-type moment, access which they were free to squander if that’s how they wanted it, but which (I also told them) I had every reason to believe they’d enjoy responsibly.

Disincentive the negative. Reinforce the positive. Students are puppies.

Everything In Its Right Place

I found this slidedeck today during my usual Internet skulking. I have never heard of these “wiki” things and I don’t know the author, but perhaps we can profit still from her hard work. 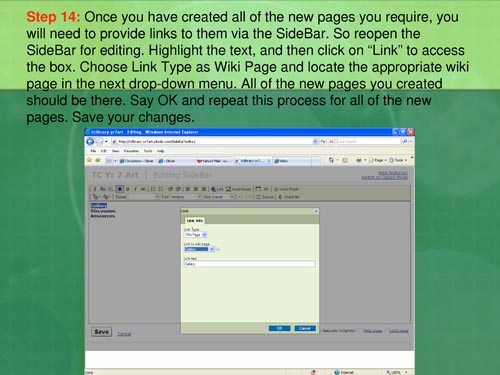 This representative slide explains clearly what several thousand of my own words, thus far, have not:

The designer pushes text and images into a single slide at the expense of both. Recognizing that slideware is great for images and paper is great for text, how would this look had she: 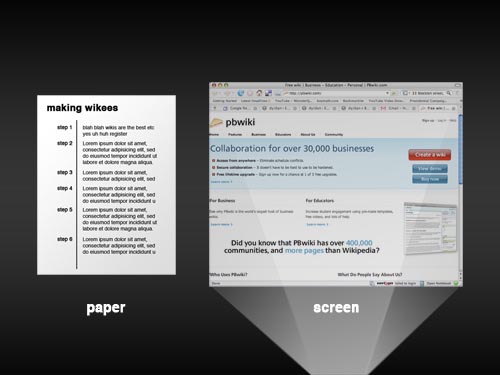 Last Drips Off The Faucet

TMAO outlines what aren’t his reasons for leaving the game, which include inadequate support, inadequate compensation, and basically anyone’s pet explanation for his attrition. He then explains:

I’m not happy unless I’m being the teacher I see in my head, but the process of finding that guy and living as him no longer makes me happy.

You all realize the only solution to this conundrum is a lobotomy, right? I don’t know how many teachers have played in the intersection of hard work and creativity for TMAO’s sustained stretch but year after year in that place, from my limited experience, the work eases up, the returns diminish, but the latter outstrips the former.

Foreshadowing from TMAO last May:

I hate to eulogize a writer who is obviously still writing but lemme just say that, while so many bloggers content themselves (eg.) debating Del.icio.us and Diigo ad nauseum, TMAO has been a rare fount of professional development in my reader, a writer focused intently on the classroom, on the issues facing the classrooms which rarely receive even lip service from the most heavily trafficked blogs.

He has been the bard of the new teacher experience for three years running and, if he is finished writing as well as teaching, I have no idea where to find the same stuff on tap.

The job won’t save you.

Lester Freamon, to Jimmy McNulty, from The Wire, a show which seems like an unfortunately apt touchstone right here. The excerpted clip is NSFW but, if you click through, try to resist the connection.

Watch this music video for Radiohead’s track, All I Need, which is as flawless a visual essay as they come.

And then watch this vodcast [3:48], in which I lay out some guiding principles for writing and shooting visual essays like this.

Alec, this one’s for you, bud.