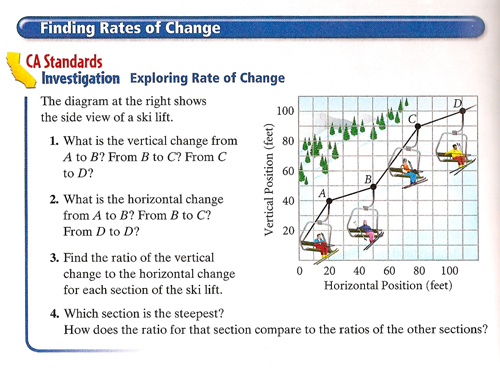 Dina Strasser asks Santa for her ideal classroom. It’s cute, and at the end, she adds this detail:

There’s no teacher desk. There isn’t now. I got rid of it in August, which I consider one of the small successes of this school year. I sit (when I do sit) at the writing conference table or among the kids, which is astonishing— astonishing— in its simple power to help me communicate with and manage the class. More on that later, I think.

Can’t remember the last time I sat in my teacher desk during class, but last week I didn’t have answers for the six assigned classwork problems so I declined student questions for five minutes and sat among them, asking myself questions aloud, in part to model the problem-solving process, and, in full, to disrupt the buffer I have inadvertently established between the teacher and his students.

PPS: I have no problem with Edublogs monetizing their unpaid blogs but those double-underlined ad links had better be generating millions because they’re the most annoying advertising on the ‘net. Until I install the relevant Greasemonkey script, I instinctive reload every Edublog site I visit, just to clear them out.

[BTW: Updated with my conversion percentage.]

Not that you asked. Alpha order:

The intent of my evolution post was to describe the challenges I face now, five years in, versus those I faced fresh from college. Others took this for, variously, prescription, condemnation, arrogance, political grandstanding, and, inevitably, a recipe for burnout, all of which missed the mark, though I enjoyed thinking that last one through.

The effort I expend doing what I can to raise student achievement gets out of control here at the end of term. Students camp outside my door with clear goals, looking for help, looking to prove they know what they didn’t use to know. I take a ten-minute lunch lately but the returns are so consistently fun that they overwhelmingly counterbalance any risk of burnout.

What does burn me out is the realization that I have resolved the largest challenges I faced as a new teacher. I am at a place, for example, where classroom management no longer challenges me. Not that every day is all smiles and hard work, just that I have identified the mix of engaging instruction, mutual respect, and tough love that eluded me for years.

Maybe that sounds great to you, and it was for me, for awhile. Can you see, though, how resolving one of the challenges which used to define my professional existence has created a vacuum? How, for a teacher who got into teaching more for the pragmatic challenge than the emotional calling, this has resulted in a kind of post-partum depression?

I enjoy the job more now than I did then. The job is easier, certainly, now. But ease and enjoyment rank lower on my list of Good Reasons To Invest Thirty Years Of My Life than a compelling challenge.

I’m trying to say that I need more failure. I have experienced too much success this year, not because I’m so amazing, but because I have failed to fill the challenge vacuum with meaningful, overarching goals, goals that I will fail to meet, say, three days out of ten for the next three years, that failure keeping me lean and hungry.

Carl Anderson, a week after the Michelle-Rhee-hates-creativity thread shut down:

I do believe that all of these subjects are tightly linked and interdependent but our school system has erected concrete boundaries around these subjects through devices such as scheduling and teacher licensing. To a certain degree you have to work with the environment and conditions you are presented with. If this is the game we are playing I will continue to fight for the arts. [emphasis mine]

I felt frustrated throughout that thread, trying to explain that, yeah, I understand that art is everywhere, etc., but that in our schools, in my practice, art has been carefully parceled into its own forty-five minute block, and I don’t have the luxury to pretend or pundit like it isn’t.

To infer a lesson for writing about education from Carl: agitate and fight for your ideals but please feel free to toss a pragmatic bone at those of us who have to do what you only talk about. If you don’t – if, for example, you ignore the fact that I have 25 standards and sub-standards to cover in 180 hours, that my school has 15 mobile laptops to share across the school, that I have to respect issues of scale, that there are separate credentials for teaching art and math, etc. – I’m sure you will find an audience of like-minded idealists, but you risk rendering yourself irrelevant to the only people who can animate your idealism.

If I ever leave the classroom, someone please remind me I wrote this.