or: An Open Invitation For School 2.0 To Pimp My Plans

I’m positive I could give that fable of greed, conspiracy, technology, and poker to a student teacher, ink still wet off her baccalaureate, and watch a pretty good show.

Every student has a natural preference for what is orderly, for what makes sense, whether they enjoy math or not. That red dot represents catharsis – the sense that mathematics has explained something very complex in very simple terms. This is an easy win.

Thing is, I’m unsatisfied by an instructional win here. I want to run up the score. So how do I maximize the value of this anecdote? I’m extremely interested in how others would handle the same material.

The Ground Rules of Poker

You can’t assume too little here. All of my kids knew less about poker than I did. So I showed ’em hole cards (the properties of which kinda pin down this whole fiasco). 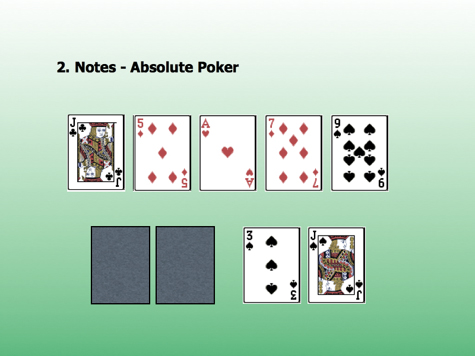 I asked them to rank the hands from worst to best. They missed a bunch. I asked why one hand beat another, drawing them towards this idea of probability – low and high. 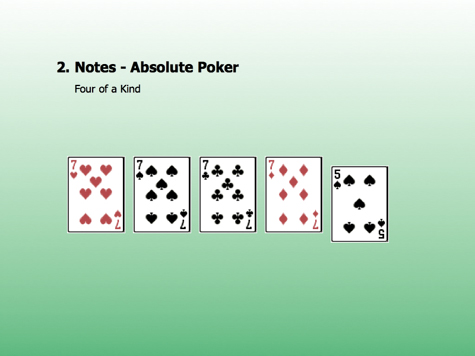 I took them through a hand, showing them their hole cards and asking them to raise a hand up if they wanted to fold their cards. If they wanted to see the next cards they’d have to wager $10. Imaginary math money. An extremely simplified version of poker.

Every step of the way, from pre-flop to the river, I asked them, what’s the best hand you could have here? What are you worried your opponent has?

The Problem With Absolute Poker

I asked them how online poker differed from table poker. I asked them how much money they’d feel comfortable pushing onto an electronic table, the only physical manifestation of which was a server farm in Costa Rica. 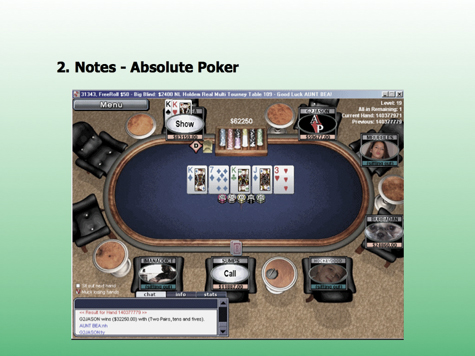 I pointed to the dollar figure in the screenshot – $62,250 – and told them that at the end of this particular tournament, the stakes were well into six figures.

Then I took massive creative liberties. I fabricated the final hand between Potripper and Crazymarco. It was only important to me that the students experience a hand which they absolutely should fold, a hand which a sane person would only hold onto if he could see his opponent’s cards. 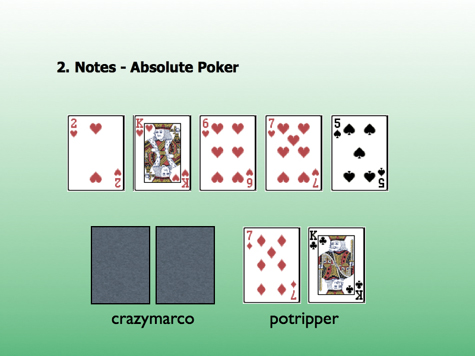 I put four hearts on the board and gave my students two pair, a hand which, given the stakes, no one should play. If their opponent carried even one heart – not unlikely – they were totally hosed.

But I told them Potripper stuck it out and won the tournament on a weak hand.

I asked them, if you were Crazymarco, what would you think about all this? They suspected cheating, just as Crazymarco did.

I told them, well, either Potripper cheated or he was really really lucky. I told them Crazymarco asked Absolute Poker for a hand history. Hundreds of pages … 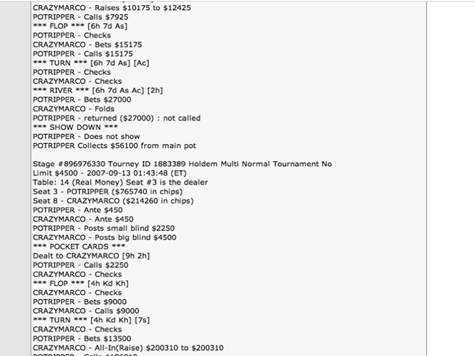 … which he and a pack of poker geniuses analyzed and organized into a spreadsheet. 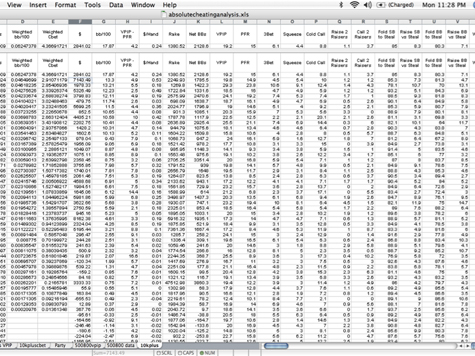 I gave them the two damning data sets (and retermed them so I wouldn’t have to explain concepts like “big blinds”): hands won and percent of hands played. 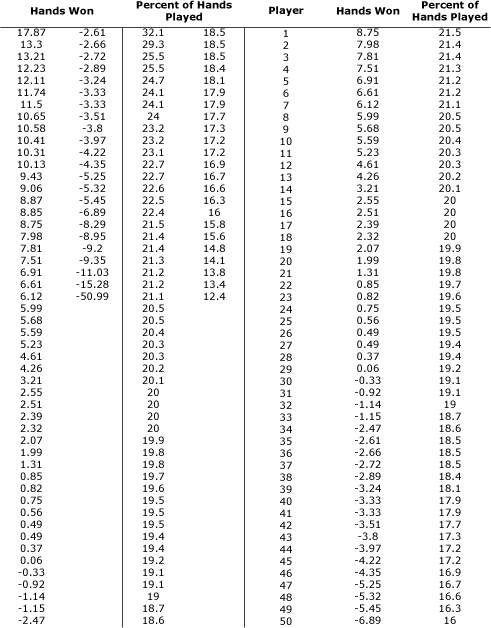 We talked a bit about what a negative number meant for hands won and what you do when someone with a low percent of hands played suddenly decided to raise the table. (A: fold pronto.)

I asked them for two histograms of each data set. We’ve done histograms. They’re powerful but good for nothing more than one data set at a time. 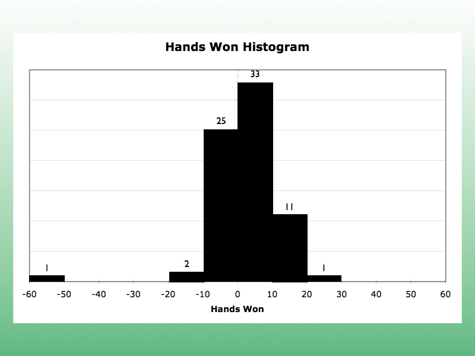 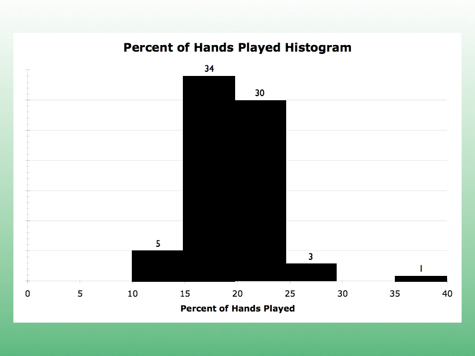 I asked them which stack held Potripper. They saw him but it wasn’t obvious yet if he was a lucky outlier or a guilty outlier.

So we made the move to two data sets. Graphing the two sets against each other was very revealing.

I showed ’em Michael Josem‘s sick plot. I asked them to point to the biggest loser on the board. And then I asked them if they saw Potripper.

They saw the red dot and I asked them if they thought that dot could hang so far out there propped up on luck alone. We agreed it was unlikely. 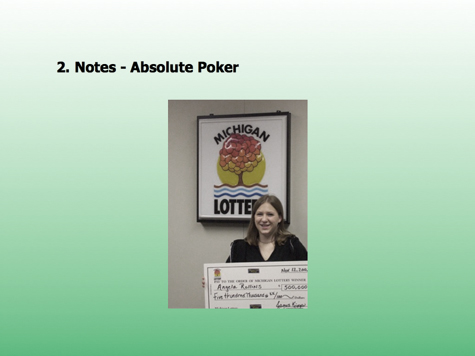 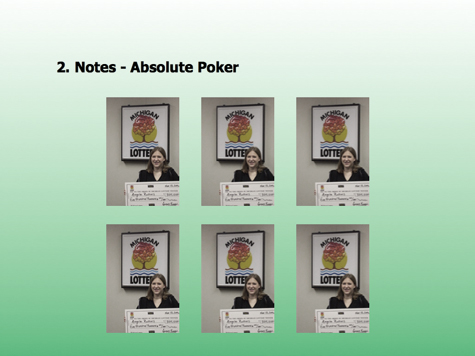 Dude cheated. We felt it. We worked for it. That catharsis was earned. This was such an easy slide into two-variable scatter plots. The histograms didn’t yield anything valuable while the scatter plot all but put the cuffs on.

I didn’t get much sleep the night before this lesson. Setting up slides like these, stocked with subtle, illustrative animations, takes time I coulda worked at it all night and, in truth, I made a lot changes – slight modifications to slide order, heavy modifications to handouts – between periods.

I got my money’s worth in the end, though. The students reviewed histograms, dug into a new concept successfully, and engagement was high.

But I was nagged often by the suspicion that a large group of educators I read regularly would cluck their tongues at the teacher’s prominence throughout the lesson. I mean, the teacher was talking a lot there. The desks were in rows. Where were the wikis, podcasts, digital cameras, etc?

So I’m curious, given a free hour, the objective that students need to review histograms and introduce themselves to scatter plots, how would School 2.0 rock this one? Feel free to use the Absolute Poker anecdote or not.

Tagging Darren and … uh … well, are there any other math teachers flying the School 2.0 flag?

How I Met Your Mother   Show and Tell: Mirror Prank
Unless otherwise noted, everything you and I post here is licensed
for reuse under Creative Commons Attribution 4.0 International.