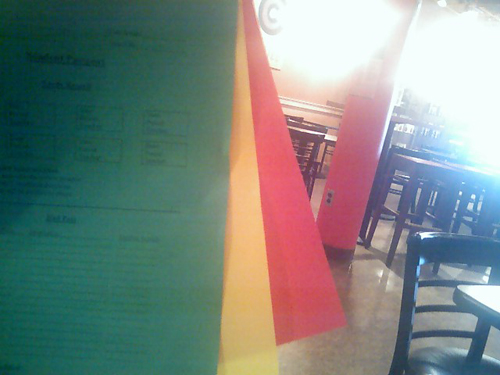 The student reaches the fifteenth hall pass or the eighth tardy, they head to the office and grab a yellow passport. They also serve five lunchtime detentions and get a parent phone call.

The yellow passport fills up after six tardies and fifteen hall passes. Penalty at the end of that is a red passport plus a one-day suspension plus a parent conference.

At the end of the red passport (three tardy boxes and fifteen passes) they fail the course with the most tardies.

They get a fresh start every semester.

This is a clear, reasonable, enforceable solution to a squall of a problem ’round here. It will doubtlessly drive down tardies. Only question is how student morale will fare, a question which is bound entirely up in how respectfully teachers fill up those passports.

From first bell to last bell: no cell phones at all.

Which would’ve been an interesting sight at this school where some students report clearing a thousand text messages by nightfall.

After some lively internal debate among the faculty, this policy was later downgraded to allow cell phone use during brunch and lunch.

I kept mum throughout the meeting (my default mode during staff gatherings, incidentally) until the following criticism of student criticism arose:

I got through high school without a cell phone. Why can’t they?

My right arm floated above my head and kinda hung there for a few seconds. I realized what I had done but before I could pull it back down, the principal pointed at me.

I cursed the edublogosphere in my head – all of you – and then said:

I don’t want to turn this into an age thing but arguments that “it wasn’t like that in my day” don’t hold much water with me. Kids didn’t have cars when my grandparents went to school but the world changed. Mobile phone penetration is at basically 100%. [Yeah, I actually said “mobile phone penetration.” *smacks head* -ed.] These things aren’t going away and someone’s gotta teach our kids how to use them right.

One person – no idea who – clapped three times from the back. I sat down, hazy, unsure of who the hell I’ve turned into.

Moodle’s gone from a zipped file on my desktop to a functioning demo in front of our math department in three days.

Gotta throw love to Marcie for the free phone tech support and Chris, who gave me some time in spite of his duties heading up the hottest high school in Philly, PA.

Moodle’s what they call a content management system. Lets teachers and kids store learning online. I only brought it up back in the day ’cause everyone wanted some way to update homework lists but no one liked the lengthy html updates which were status quo.

So I asked everyone to bring a laptop and we got started first by showing everyone how to post a homework assignment. Really easy and yet lotsa trouble around the room.

I showed ’em how to add a link, say, to an online graphing calculator we used in our (hypothetical) lesson. More trouble.

People seemed intimidated, impressed. Can’t shake the awareness we’re nowhere near the bottom of this thing.

The prospect of registering our students daunted all of us. That’s where I’ll lose some folks. Me, I plan to make registration part of our opening week activities, sending kids up to my laptop to sign up and enroll in our course. I plan to drive student traffic to our Moodle page by linking to the daily cool video I show at the break (stuff like this).

How much of yourself do you share?   Personal Ads in Education
Unless otherwise noted, everything you and I post here is licensed
for reuse under Creative Commons Attribution 4.0 International.