The teachers I work with – the veterans, anyway – measure their careers as the pendulum swings. They’ve seen us swing between whole language and phonics, standardized assessment and teacher autonomy, constructivism and direct instruction, enough times to just bunker down and wait out the uncomfortable stretches.

Me, I haven’t seen much, but I’ve got my eye on a new pendulum. At this end you have districts struggling to implement system-wide e-mail, districts still taking attendance on paper, still finding novelty in PowerPoint.

A lot of edubloggers are struggling mightily to push that pendulum across this dizzying chasm. They’re pushing us toward connectivity, global communication, and tech integration. They’re a determined bunch and I have little doubt they’ll get us there. At a certain point, though, many years from now, they’ll realize that their returns are diminishing. Like widgets to a blog, they’ll keep adding internet apps to their projects and tech elements to their rubrics but student confusion will increase and satisfaction will decrease in spite of their best efforts.

Which brings us to last week’s discussion of the Chicago Graduate School of Business and how so many people have misunderstood CGSB, in particular, and instructional design, in general.

Summarized, CGSB has asked future applicants to include a four-slide PowerPoint presentation but they needn’t bother including a) embedded hyperlinks, b) video, c) audio, or d) animated GIFs, among other multimedia elements, because CGSB is printing the slides to paper.

The implications of that one paragraph have cut our happy home to pieces.

I’ve called it ingenious and I’ll stick with that.

Others think it’s an example of good intentions (a school looking to include new media in its admissions process) undermined by an attachment to old media (printing the slides out on paper). Teachers on that side of the gym would rather see a four-slide PowerPoint presentation include (presumably) video clips, a podcast introduction, slide transitions, etc.

Do you want to review all those applications?

I don’t think my opponents appreciate just how rough it would be for a magnet business school to accept broad, multimedia-heavy presentations from thousands of applicants. How does one even cap that? Five minutes of video and five minutes of audio per applicant? Ten minutes total? Two minutes total? For the sake of the admission panelists’ home lives, constraints are gonna rain down somewhere.

This particular constraint – that the slides function exactly as well on paper as they do digitally happens to be the smartest the panel could’ve imposed. It’s so smart, in fact, I can’t help suspecting it was completely accidental. A few reasons why:

It is much harder to include less than include more. In design, we want to encourage “less.” We want to discourage “more.”

It takes talent to include less. I know ’cause, sincerely, I don’t have it. I’m not sure who does. Ten out of every ten presentations I’ve attended and lessons I’ve observed I can spot

Check this out. Most people are red. Some people are yellow. I’ve never watched a green presentation. Ever. (And I’ve seen Kawasaki in person.) Most people get boring-er as their talk winds on. Some people can keep their quality at the same level the whole way through, but even that is unacceptable, the carny equivalent of watching the same awesome magic trick over and over again. Returns inevitably diminish.

Less is preferable to more in every case except for those who can perform increasingly amazing magic tricks.

If they opened up their assignment, if they allowed multimedia PowerPoint slides with embedded audio and video, CGSB would create a warm damp environment for bacterial design. People would ramble throughout their video introductions, stumble through their podcasts, and shoot their slides full of bullets, never once wondering “could I do this with less?” because no one had required that kind of reflection.

Even assuming the applicant had the skill and equipment to a) script and record the audio, b) edit the video, and c) design the PowerPoint template, there are more reasons to distrust the open-ended multimedia project.

I think I can illustrate it. Let’s assume a four-slide set (designed in Keynote ’cause I know the score):

… in which I introduce myself. 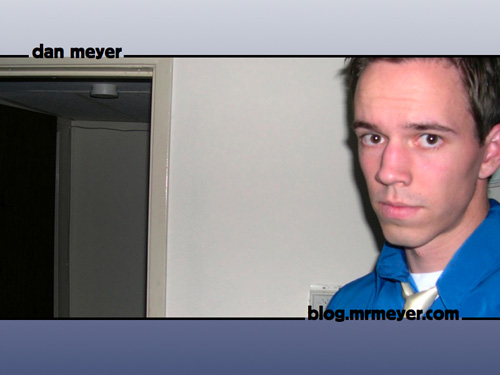 … in which I embed a hyperlink to my blog. 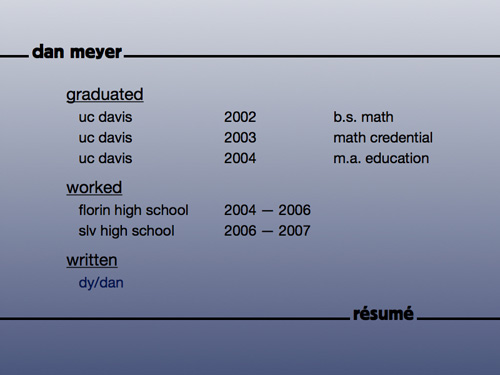 … in which I deliver a video introduction covering several significant events in my life. 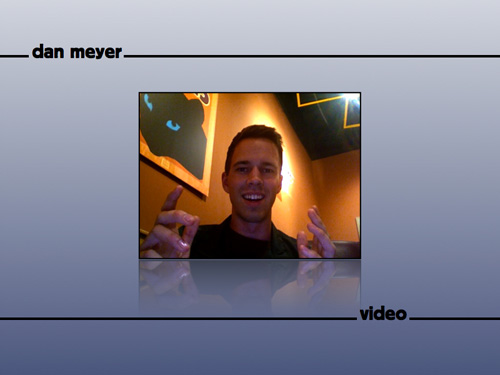 … in which I play back a classroom discussion. 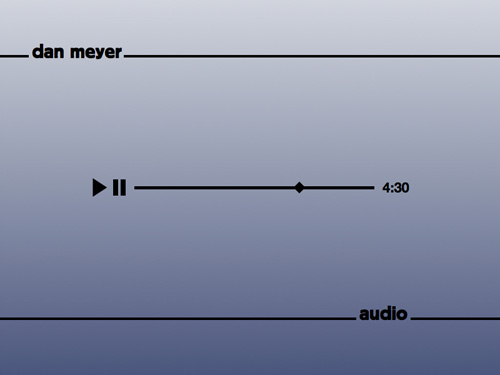 First, can you imagine assessing thousands of these?

Even assuming the applicant created multimedia content worth consuming, unless she has seriously sweated the themes of her content and where they overlap – if, for example, “good planning” cropped up as a selling point in both the video and the audio – we’re still trafficking in wasteful design.

The point here is that constraints, for lack of a better word, are good. In design, requiring fewer materials almost always improves matters.

After slogging through my opponents’ open-ended multimedia barn party, feeling keenly aware at all times that I was wasting pixels, minutes, and words, CGSB makes me feel comfy and warm.

Especially for a business school, which, according to its press release, values brevity, concise communication, and two-minute elevator pitches, locking this thing down to four slides seems obvious.

But restricting those slides to their visual snapshots (whether we find those snapshots on four pieces of paper, four digital jpegs, or four 8×10 glossy photos doesn’t matter) is downright inspired and, were that requirement adopted by other universities, could kill bad design while its designers are young.

Under these constraints, CGSB has forced me to consider the question, “what is essential?” and then its corollary “can I say it with less?”

CGSB has forced me to reckon myself, to determine my essential attributes and sell them quickly. Particularly for a business school, such a perfect marriage of form and function indicates either Mensa-level intelligence or luck I’d like to take to the track.

I’m smart but so are my competitors. I work hard which plenty can also claim. I like to work hard which fewer can claim. I’m a meticulous planner – probably want to pump that somewhere. I’m kind of creative. I’m kind of funny. It’d be awesome if I could get all that in four slides and spin a joke on its surface.

To paint this portrait of a Meticulously Cheerful Creative Worker, I’m going to highlight several accomplishments in extremely brief detail. This surface-level detail will a) look prettier than if I talked about each of them in an embedded video, and b) make the admissions panel want to meet me.

These accomplishments have been carefully chosen. There is no time or screen real estate to waste. In just four slides and several dozen words I’ve hit everything my sprawling multimedia wonderland did and I left the admissions panel wondering, what the hell else has this guy done?

Each of those slides earns its keep. Sure, they overlap across the image of a workaholic overachiever but each adds something unique. The world record required planning, graduating quickly required hard work, and that lesson required creativity in abundance.

I thought a family photo album would be a fun theme to run through the project. I thought it was kind of a fun joke – this toddler breaking records, graduating university, etc. – but your mileage may vary.

Isn’t it cool how the tech-lite version of the project required intense thought and communication while the open-ended multimedia melée required intense technical skill. Any guesses which CGSB values most in a candidate?

In the comments back when, Scott McLeod likened the four-visual-slides-only constraint to forcing a Ferrari to drive the Autobahn at Amish buggy speeds. It’s a fair analogy, except that constraint doesn’t benefit either the Ferrari or the Autobahn.

The constraint CGSB has imposed benefits everyone. It’s easier for them to assess, easier for the applicant to satisfy, it’s more closely aligned to their values, and if that sum isn’t sufficient, it makes good design a requirement of admission at a cherry college. I’m not sure I can calculate the long-term effect there.

So here again, mountains of tech are available and we will avail ourselves of even more. But even though Microsoft allows you to embed video and hyperlinks, you are also free to reject them.

In an e-mail to Scott McLeod, it seems CGSB would like to accept multimedia presentations but lacks the digital infrastructure. This alone a) makes Michael McVey’s original charges of Ludditism seem rash and b) confirms my suspicion that this has all been a lucky accident.

It’s unfortunate. Soon they’ll encourage more tech and consequently promote waste rather than demanding less and making strong design a condition of admission. Whether or not I’ve convinced anyone of CGSB’s incidental wisdom here, you and I both lose.

In a few years the pendulum will reach the end of its swing (hastened there by CGSB’s future policy revision) and begin its path back towards restrained tech use and greater emphasis on the teacher as classroom leader. The current whipping boy of low tech integration will abdicate his post to excessive tech integration. The tech frenzy will subside and people will wonder, how much tech is just enough. CGSB has found that happy place, though just for a moment.

Chicago Follow-Up   Not To Dredge This Back Up
Unless otherwise noted, everything you and I post here is licensed
for reuse under Creative Commons Attribution 4.0 International.