I downloaded thirty-or-so old school album covers (like, old school), enough for each member of them class, printed them all out on matte photo paper for $4.50 at a photo booth, and passed one out to each kid along with a tally sheet.

The kid categorized her reaction to her own album cover as one of “Love,” “Like,” “Dislike,” or “Hate.” The student then wandered from desk to desk, making two marks per album cover. One on her own sheet, which she carried with her, and one on the tally sheet, which stayed at a desk.

Then she got back to her desk and made two stacked bar charts. One for her own design tastes. And one for how well the class regarded her album cover.

I used the same album cover for each of my three algebra periods and had them use the same color legend so the result was a kind-of-slick representation of how the classes differed. (For instance, third period had some extreme reactions to the Devo cover below while the other two periods were more tempered in their enthusiasm.) 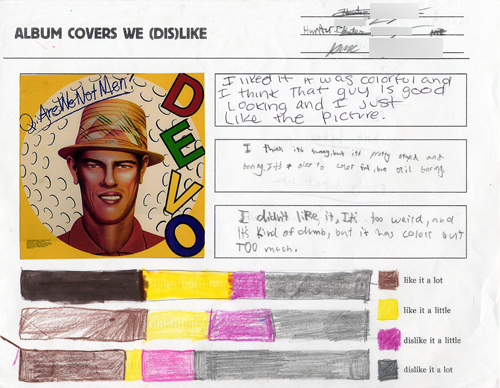