How Old Is Tiger Woods?

If you asked me to name something that’d trigger a teenager’s passion, I wouldn’t leap at “Correctly Guessing a Has-Been Celebrity’s Age” straight away. But there they were, hollering, competing, and rallying over near misses like frat boys over fantasy football. 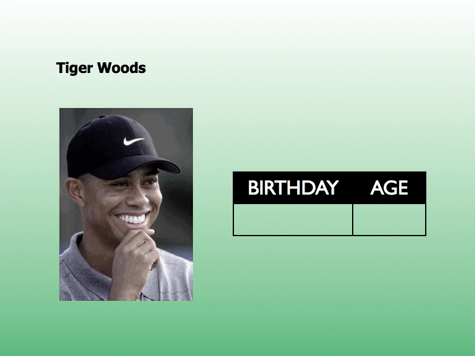 Make the math as hard or as easy as you want here.

Give the winner a fun-sized candy bar. Let her select a celebrity for inclusion in next year’s lineup.

Credit Where It’s Due:

Got this idea from my ed-school mentor several years back. Yo, AB, I still use your stuff, man.

[Update: Matt has some pretty priceless extensions to this lab.]

How does the Mean and Median of all student guess do in this competition?

Creating a histogram of the guesses.

Oh yeah, that’s great. It’s so clear now. I need to feature as many or more celebrities as there are students in the class. After the main event then I assign a celebrity to each student, they collect the guesses from around the class and perform a statistical analysis. Maybe I have Keynote slides set up so they punch in their data and present it real quick.

So Happy Together #1   Rock The Vote: A How-To Guide
Unless otherwise noted, everything you and I post here is licensed
for reuse under Creative Commons Attribution 4.0 International.